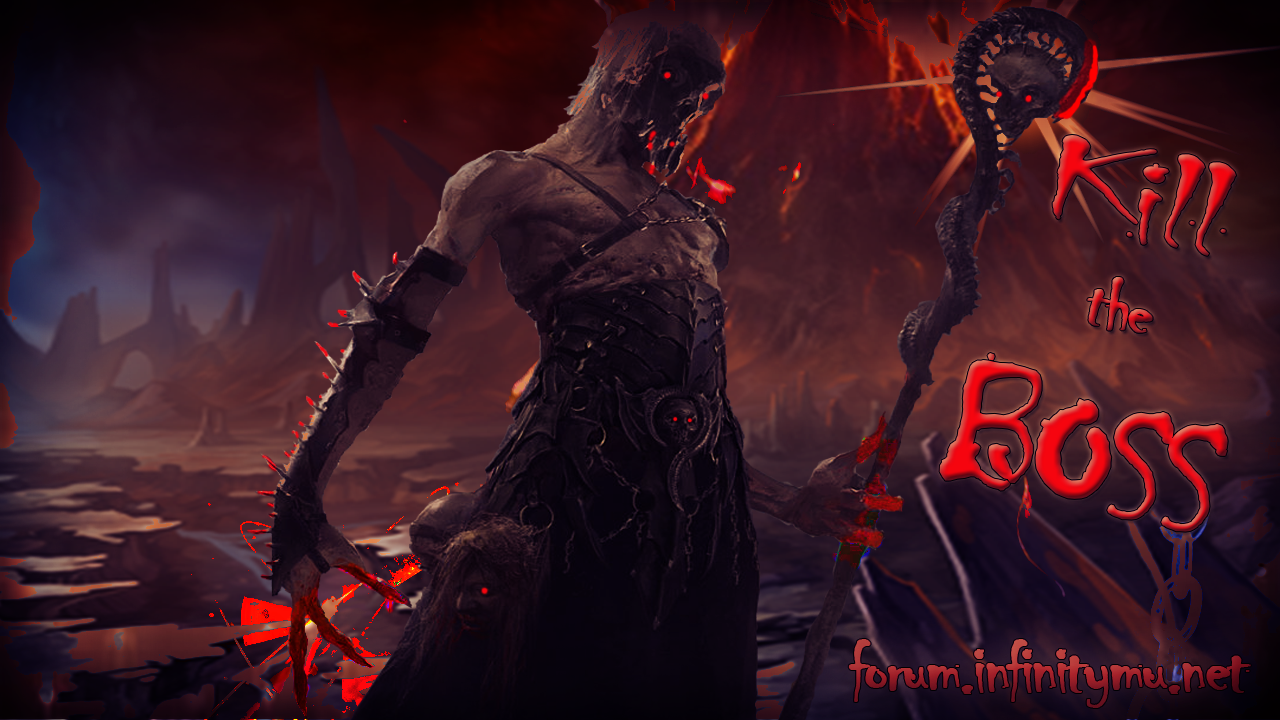 Special thanks to Draft for making this awesome banner

Many many ages ago one of the Angels failed from the sky and become a evil and attacked the MU Continent, but a brave heroes gather around and
Killed the BOSS

Since the first time the Boss was defeated he laid a curse over the land and he will be reborn each month, but the brave heroes of iMU wont let his vengeful attacks on the innocent. Each month they gather around and stand against the all powerful Boss. Many of them will fail, but the bravest and the strongest will survive and will defeat once again the fallen boss.
This fearsome attack starts every first Saturday of the month - same time as CS

There will be two stages of invasion. During the Stage 1 few of the boss Generals will arive somewhere on the map and will try to attack your villages - so you will have to gather all of your courage and strength to face and kill them. Once all of the "Generals" are defeated the great BOSS will be summoned and you will have to fight for your home, for your loved ones once more ...

.: Special forum tag for the braves among you :.


Buffs, shield, pet, AG allowed.
Staff team is allowed to join
You are NOT allowed to use any type of hack / bug
Brace your self with all the courage you have and face the BOSS
Fail to do fulfill any of the rules will lead to Disqualification from the event

All brave heroes that defeated the BOSS over the years :

Not following the rules will lead to disqualification.
Spam will be not tolerated in this thread.
For any question PM Mahace !​

There were only few players and it took about 20 minutes, I opened my chat for 3 seconds to repeat where I was located and boom, I got killed. I had only my own swell, but next time I will be fully buffed and you will need much more players to kill me.

And so the winner of this month is Dumbledore. Congratulations! He chose FO 3rd MG Wings as his prize. See you next month!​
Lehoj

The winner of today's Monthly Kill the Boss is reload and his prize was FO 3rd BM Wings. This time it took 16 minutes to kill me. There were a lot of SMs and only one BK. One of them was killing all players. :/ Instead of killing you could join others and attack together, that would be more fun. Anyway, congratulations to the winner! See you next month!​
Lehoj

Event will start in 4 hours and 30 minutes.
Lehoj

I am sorry guys but event will be postponed. I wasn't able to host it today. I'll update the thread soon.
Lehoj

The winner of today's Monthly Kill the Boss event is reload! This is his second win already. It took 27 minutes until I ran of pots and kill me. He chose 2x FO Crystal swords as his prize. Hope you will enjoy in the next one too! See you next month!​
OuTBlasT

Monthly Kill the Boss will be hosted on Sunday at 14:00 GMT+1, prepare your selves and make sure to participate!
OuTBlasT

Well we had massive attacks from many dmgers today. All kind of character classes was partecipating and attacking me hard for around 10-15min which i've resisted and died without at least finish all my pots on inventory, players did all their efforts to make serious damage!

After the long battle the winner of Dicember Kill the Boss is :

GPET was given to McMini as choosen prize and 3IMES points will be added to my scoreboard! Hello everyone, this edition of monthly kill the boss event will be hosted on Satuday (16th of January 2016) approximately 2 hours before the scheduled CS time, you can check it here: http://www.infinitymuonline.com/?Infinity=cs
Alin

Hello, just a quick reminder that kill the boss event will be hosted today , 2 hours before the scheduled CS time. Thank you and hope to see you there!
Andromeda

this edition of the [Monthly Big Event] Kill the Boss was hosted by Alin as the Boss and me, as a supporter
The event took place 2 hours before CS as it was previously announced and there were many players from different classes. The map was Atlants 1 outside and the server was 1 of course. Everyone was fiercely attacking the boss, until there was one final winner and this is: AniToS and he chose as his prize F.O. Wings of storm + 13.

Congratulations!!! Looking forward to seeing you in the next edition as well ! This edition of kill the boss event will be hosted tomorrow, 7th of February 2016 same time as Castle Siege time
Andromeda

Hello everyone, just a quick reminder that the event will be hosted in 1 hour and 30 minutes!