I've seen a lot of confusion regarding yellow options such as SD Damage Absorb, SD Ignore and SD Decrease.

I decided to create this guide, where I will share all my knowledge about these yellow options.

We all know that DDR gives us defence, and it's great for tanks. But this guide will focus more on less explained, yet the most commonly used yellow options, such as: SD Ignore, SD Decrease & SD Damage Absorb.

This came out a lengthier than I expected, so I will create this small list of contents for quick explanation on what's where:

What is SD?
Explanation of SD.

Why is SD important?
Functions of SD.

How to restore SD?
Here are multiple ways of recovering SD.

How does SD protect me in PvP?
Mechanics of SD.

How to counter SD Damage Absorb users?
I will explain the SD Ignore and SD Decrease yellow options as well as its mechanics here.

Gear recommendations
I will give insight on what you should buy to my best knowledge.

Before we get into yellow options, allow me to explain basics about SD:

This yellow bar in the picture below is SD.

SD refers to Self Defence (A.k.a. Spiritual Shield), which is a yellow bar located to the left side of health (red) bar.

SD is an accumulation of total stat points of your character; the more points you have invested in your character, the higher amount of SD you will have available in total.


Why is SD important?

SD has a crucial role in PvP, it acts as a shield which must be first destroyed before the character starts taking a full health damage.
This naturally allows characters greater survivability in PvP.


How to restore SD?

Characters automatically spawn with full SD. Moreover, SD can be replenished by doing either of these:

- Visiting safe zone.
- Character re-spawning after dying.
- Using an armor piece with a pink option "SD auto recovery" such as: 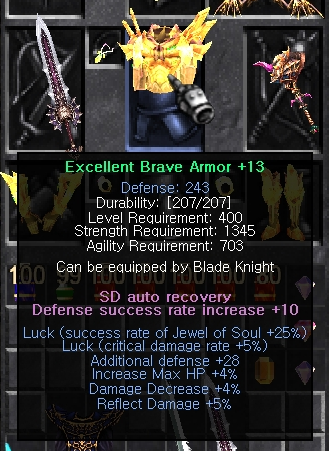 The SD auto recovery pink option will slowly regenerate your SD even outside safe zones, but with a small delay after taking damage.
- Using Large Complex Potion/Large Complex Potion +7
- Rather cheap way to restore is simply switching character/server, this will always refill your SD bar.


How does SD protect me in PvP?

By the default, when character is attacked in PvP 90% of the damage they receive goes towards their SD, while 10% of that damage is directed to their health.

Note: SD will not prevent death if health is depleted first.

What is SD Damage Absorb, and how does it work?

Each piece of set, including shield has a maximum SD Damage Absorb value of 5

So why should we use SD Damage Absorb in our sets, and what benefit does it have?

As we know, by the default 90% of the damage we receive goes towards SD and 10% towards health.

What SD Damage Absorb does is, it increases our default SD Absorption beyond 90%. Meaning, if we equip two pieces with SD Damage Absorb, for example Boots and Gloves or Gloves and Shield, our SD Absorption will reach up to 100% resulting in all the damage you receive to be transferred to SD instead of your health. This means that as long as we maintain our SD bar, health will be untouchable, unless opponent uses SD Ignore/SD Decrease weapon, which I will explain later - as well as why would you want to avoid taking damage to health.


Why is SD Damage Absorb important?

Normally when character receives damage to their health, they stumble momentarily and become unable to attack or execute skills for short period. Below you'll see my character making stumbling animation upon receiving damage.

P.S. Credits to @bontzovi for helping with video.


What are other ways of preventing the stumbling animation?

Using these pets will prevent stumbling animation even when taking health damage, therefore it is viable to use Damage Decrease Rate 7% yellow options on your sets instead.

Which characters can use these pets?

There is only one way to effectively counter SD Damage Absorb set users; equipping weapon(s) with SD ignore rate when attacking or SD decrease rate yellow options. These yellow options have different roles, here's what they do:

SD Ignore grants each attack a chance to completely bypass opponent's SD and deal full damage to their health. This will help momentarily stagger the SD Damage Absorb users, as there will always be a chance they'll receive health damage as long as your equipped weapon has SD Ignore option.

Note: SD Ignore works regardless of the amount of SD Damage Absorb parts the opponent is using. SD Ignore is always the safest option to use, unless you specifically need Critical damage increase, or you know that SD Decrease will work.
Note 2: Swords and other type of weapons possess SD Ignore rate when attacking +10% while staffs can reach up to SD Ignore rate when attacking +15%.
Note 3: Your reflected damage is affected by the SD Ignore option. As long as you have at least one weapon equipped with SD Ignore, your reflect will also gain ability to penetrate SD of your opponents and deal full damage to their health, even if you don't directly attack or use skills against the opponent attacking you.

SD Decrease works by lowering the SD Damage Absorb parts of your opponent. SD Decrease weapons will stack their effect from equipped weapons.

The most powerful combination is the dual SD Decrease staffs. This combination removes any possible SD Damage Absorb protection from the opponent. However, this is only possible for MG/DM as this is the only class capable of wielding dual staffs or a sword and staff.

Maximum possible SD Absorption is 120% (Set and shield with SD Damage Absorb.).
Dual SD Decrease staffs result in a SD Decrease value of 26%. 120%-26% = 94%, resulting in the opponent taking 6% health damage all the time and constantly stumbling, making it difficult for them to fight back.
Click to expand...

For example you are BK and your opponent is SM with two SD Damage Absorb parts, meaning their SD Absorption is at 100%.

If you attack the SM using a single SD Decrease sword, you'll neutralize both of their SD Damage Absorb armor pieces, bringing their SD Absorption back to 90%, as if they never had any SD Damage Absorb parts from the first place. This means that you'll deal 10% damage to their health and 90% to their SD. This will naturally prevent them from attacking you uninterruptedly because they'll be constantly taking health damage.

If the very same SM equipped two more pieces with SD Damage Absorb, their SD Absorption would reach up to 110%, resulting in neutralizing your single SD Decrease sword because 110%-10% is 100%, this would now result in the SM being able to attack you without interruption and possibly kill you swiftly. In this case, you would need to react by equipping a second SD Decrease sword in order to bring their SD Absorption back to 90%.

However, if this SM equipped all six pieces of SD Damage Absorb, both of your SD Decrease swords would be neutralized, and you'd need to change into SD Ignore swords.

I'm going to buy Tier-2 Uber Horus ($50), which yellow options should I choose?

If it was Tier-2 Uber Amun Ceremonial ($50) set, the answer would be quite simple - full DDR, because of the nature of the DL. DL characters utilize Dark Horse which allows them to attack their opponents without interruption, therefore they don't need SD Damage Absorb sets. Elves are in the same situation as they utilize Horn of Dinorant, granting them immunity to stumbling animations, therefore they can also attack without interruption and do not need SD Damage Absorb pieces in their armor.

However, this is difficult to answer because of the nature of SM, as it almost always depends on what class opponent you going to face, and their choice of yellow options. The SM is unable to use pets to gain immunity to stumbling animations, therefore SM characters have to fully utilize their SD Damage Absorb pieces in order to remain effective in PvP.

Ideally as a SM, you would want to have two staffs and two sets. One staff with SD Ignore and another with SD Decrease. Full DDR (Damage Decrease Rate 7%) and full SD Damage Absorb sets. This will allow you room for optimizing your gear depending on the choices of yellow options your opponents will make.

However, if you are only able to purchase one Horus set, I would recommend choosing five SD Damage Absorb parts and a SD Ignore staff, and the reason for this choice is:

As a SM, you would be probably battling other SM players, so let's take SM vs. SM scenario.

The reason of set choice (Five pieces of SD Damage Absorb): If your opponent switched to SD Decrease staff (Staffs have 13% SD Decrease value.), you would require a minimum of five SD Damage Absorb pieces in order to prevent them from bypassing your SD set, which would result in causing your character to constantly stumble from taking damage to health.

The reason of weapon choice (SD Ignore rate when attacking): If you are going to have only one weapon, the safest choice of a yellow option is always SD Ignore. Not only SD Ignore will allow you to have a decent chance against the users of SD Damage Absorb sets in combat, but it will also cause them to stumble from your attacks and reflect, preventing them from chaining non-stop attacks on you.


Can yellow options be changed after they arrive in vault?

You can change yellow options using the Webshop -> Warehouse -> Upgrade -> Upgrade Item. However, this option costs 2,250 Credits per change. If you have recently bought an uber item (1-2) weeks ago, I suggest contacting RESiSTANT either via [email protected] or Discord: VENCi#3206


Which classes utilize the SD Damage Absorb most?

The classes that utilize SD set the most are SM, BK and MG (Strength type). However, the most SD set reliant class is SM, as it is possible to create full DDR PvP BK. As well as energy MG which utilizes Horn of Uniria and full DDR set.

Because of the nature of ever-changing PvP which is still relevant today, I will leave this guide open for changes and corrections. Please PM me if you find something that needs changing or correction. Thank you!

I may have forgotten to add something. I will most likely keep on editing this thread for improvements.
Last edited: Feb 7, 2022